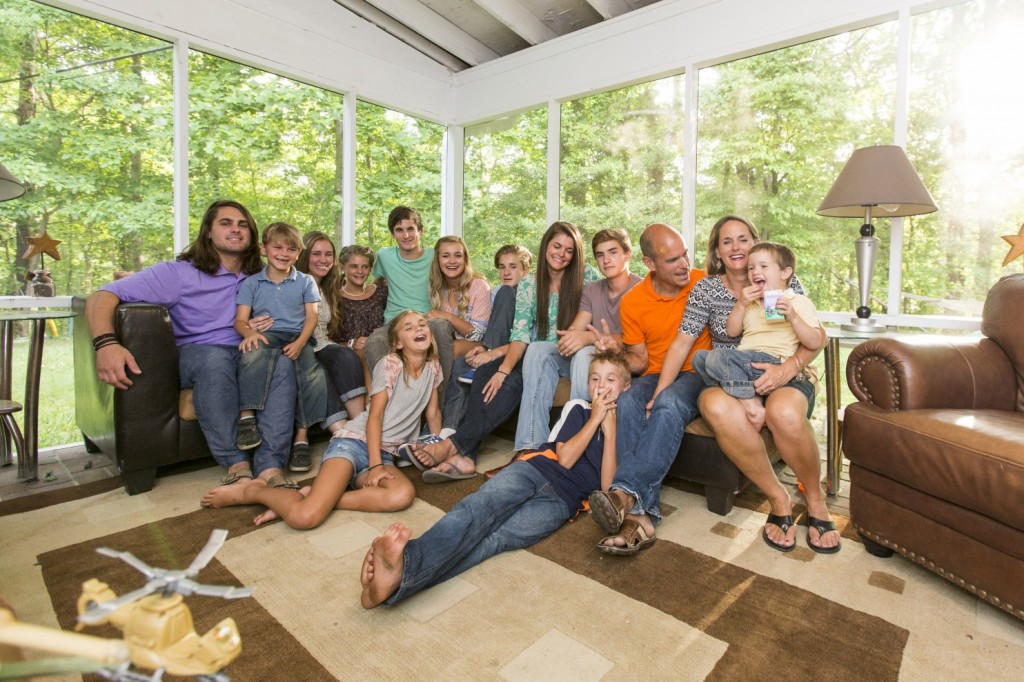 In early August, the Washington Post published a story about the Fatzingers, a family in Bowie, Maryland who attained financial freedom, despite having 15 members.

Rob and Sam Fatzinger along with their 13 kids, live debt free. Thanks to their healthy finances, the couple hopes to send all of their kids off to college, and Rob (Sam is a stay-at-home mom) hopes to retire early at 62.

The Fatzinger family thrives on a shoestring budget. Rob is by no means a slouch when it comes to earning power since he reels in a $110,000 salary. However, it’s not as substantial as it seems considering he has 14 mouths to feed, meaning he has to scrutinize and track every expense like the rest of us.

So what can you learn from this frugal family? Although their practices are not 100% adoptable by all households, their financial habits provide some vital lessons for families everywhere.

More importantly, they prove that it’s possible to accomplish things in life without having to live in the throes of debt.

So how do the Fatzingers do it?

Rob and Sam have implemented a cost reduction strategy that you’d expect to see in a business plan, not a piece of paper posted on a fridge. What’s even more impressive is the fact that they established this before they started their family, and prior to any major milestones.

Just look at their beginnings. Before the birth of their first daughter, Rob and Sam ran a Christian bookstore, claiming to have never earned more than $36,000 annually. Yet still, they got into the habit of saving 10 – 15% of their income.

As for buying their first house, the couple purchased a five-bedroom home out of foreclosure for a mere $150,000, gradually renovating and expanding it into an eight-bedroom estate.

Now, the parents of 13 are focused on getting their kids through college, without sacrificing their frugal fundamentals. The kids won’t receive any handouts. The parents have made sure that their kids get jobs (assuming they’re old enough), make use of grants and scholarships to fund their education and cut costs on personal items such as clothing.

While many families start life and then figure out how to pay for their lifestyle choices, the Fatzingers did the reverse.With Rob and Sam, it’s clear they established their financial margins well before starting their family.

Regardless of whether you are on the verge of starting a family, or already have a growing nest as well as some debts, the Fatzingers can teach you a few lessons about managing your household finances.

When life “starts”, whether that means tying the knot or adding a new addition to the family, developing a habit of saving gets tougher. It’s a good idea to have some savings in place before the madness begins, just in case your salary does rise as expected or if living costs increase (which history has shown happens).

The Fatzingers experienced this. They already had a few kids far before Rob was earning six-figures, having to support his growing household with his $40,000, then $60,000 income at first. There’s a good chance that his savings helped to keep the family afloat until his salary increased.

The lesson for you here is one you’ve heard many times: save in the years before you face big commitments. Even if you already have major responsibilities, save anyway. They can come in handy if your circumstances get more challenging, or if you ever face an emergency.

With that said, their home wasn’t new. Their home needed massive repairs, and a local priest even asked jokingly, “should I perform an exorcism on the house?”. On top of the need to fix their property, they needed to expand it to support their growing family.

Had they purchased a brand new home with the eight-bedrooms they would eventually need, the asking price would sit at a much higher number. Rather, they decided to stick with their frugal practices, spending on an “as-needed” basis rather than splurging all at once.

The lesson here is that you can start with “the basics” of something, whether it is a house, car or even a phone, and add on features or modifications later on. There really is no sense in emptying your wallet all at once.

3. Leverage the finances & help of others

Here’s another thing that the Fatzinger’s can teach us: you don’t have to dish out all of your funds (or effort) for what you need or want. Going back to their house, much of the repair work that took place came from the volunteering hands of neighbours, not contractors paid for by the family.

Sam described the community construction project. “Youth groups were over here, ripping up the carpet, taking down walls,” she says. The family accepted various items from neighbours including couches and a wooden stove.

It wasn’t until years later, that Rob and Sam used two-zero percent finance offers to fund a kitchen reno job. The project cost $28,000. The couple went on to pay off the loans in just eleven months.

The lesson here for you is this: without mooching (whatever that means for you), you can accept gifts from others, whether it is their time or possessions (even money).

Refusing the offerings of others is typical in North America, considering the way our society has evolved into a “self-sufficient” or DIY culture. But if you really want to save money (and time), then you might not want to refuse the people who can offer help.

A recurring theme that surrounds the Fatzingers’ lifestyles is the issue of prioritization. For Rob and Sam, handling money is not just about paying bills on time, but also, rationing their expenses.

For example, the couple puts $3,000 towards their savings every month, an investment which would amount to roughly 30% of their income. In addition to these savings, they keep their expenses on non-essentials such as a gym membership to a minimum, for which Rob pays a meagre $10 per month. And for eating lunch away from home, the couple enjoys one outing every 20th of the month.

The Fatzinger’s have essentially taken Maslow’s Hierarchy of needs and aligned their finances with it, “splurging” on their physical and security needs (in this case, finances). Their entertainment and recreation expenses sit closer to the top, where there is little urgency.

What the Fatzingers teach here is the need to prioritize your allocation of funds. You should put more money towards the things that will benefit you long-term, whether they are savings, investments or emergency funds. You can certainly have your share of non-essentials and luxuries, but they shouldn’t absorb all of your earnings.

5. Get the kids involved with finance early

Sam Fatzinger is quite adamant about her kids earning their own money from a young age. “My kids all get jobs as soon as they’re old enough,” says Sam, resisting the notion that kids should get an allowance.

For example, Barbara, 20, started working at 11, first at Rita’s Italian Ice and then eventually she found a babysitting job. She currently attends the University of Maryland Baltimore County. While many students can spend tens of thousands just halfway into their post-secondary schooling, she only paid $2,500. At its core, Sam and Rob are teaching their kids independence. However, they are also turning their household to an income-generating machine. By having all of their kids get jobs once they are of legal age, there are multiple wage earners in the home, and they can pitch in towards family expenses as well as their own needs. It alleviates the need for their parents to spend money on every requirement of their kids.

While it’s true that you should save as much as possible, you shouldn’t focus on saving alone. You actually accumulate wealth by earning more, not just from saving. The earnings of the Fatzinger kids remain a mystery, but it’s clear that their efforts are giving them a headstart on life.

Take notes from the Fatzingers if the thought of raising your kids and sending them to college brings about stress. Yes, you are responsible for your children, but they’ll soon have to be responsible for themselves. So prepare them. By getting your kids involved with finance early, you’ll not only turn them into responsible adults but also vital assistants who can make money management less of a headache.

Keeping Up With the Fatzingers We must reiterate that the extent to which the Fatzingers’ have achieved their debt free isn’t easy to mimic. However, the lessons they teach can apply to any family.

A lot of it boils down to prioritizing one’s finances.

Ultimately, the Fatzingers teach that you can live a normal life enjoying everyday things without having to overspend. Whether it’s renovating a home or sending your kids off to college, you can accomplish your goals while saving money and making investments.

So are you looking to free the clutches of debt and live in the blissful state of financial freedom? What tactics have you tried to keep your debt under control?